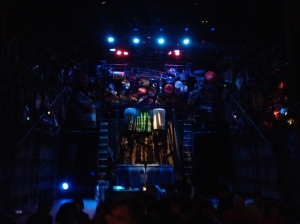 First, lest you think I have decided to try my skills at driving and blogging simultaneously, I am actually in the passenger seat and Mr. Galán is driving my car headed back from spending the day in New York City. For the first time since about a week for Christmas Break ended, I actually took an entire day off. It was a beautiful day to do this because it was actually almost 60 and the sun was shining.

The morning began a bit dreary and it was actually spitting snow yet again in the hills of NEPA. When we got to NYC we began our day at a restaurant called El Malecon, a Dominican restaurant. The food was amazing and I had a dish called Mofongo de Filete de Mero, which was fried plantains in a sort of formed mound on the plate and an wonderful piece of Grouper. Grouper happens to be my favorite fish ever. For something to drink, I had a beverage called Morir Soñando, which literally means ” to die dreaming”. This might be apropos because it was one of the most pleasant things I have ever tasted. It is orange juice, milk, and vanilla. I brought some of my food home because it was so filling (and it was reasonably priced). It was also helpful to have three native speakers with me. I have learned that I might have to the “the beverage maven” make this amazing beverage as a pitcher of that in the refrigerator on a regular basis would be a nice thing.

Following our lunch, I had the opportunity to meet some of the Galán extended family. An aunt or great- aunt recently needed some serious surgery for a severely broken leg. I have never witnessed such a strong person. She was so matter-of-fact about her situation. I am thinking of a sign I have observed from time to time: “no whining allowed”. I believe this woman’s name was Carmen, and, well, she epitomizes this sign. I was reminded walking up the steps to their apartment about the difference in city living and being out in Bloomsburg. I am not sure what rent costs, but I am sure it is not cheap. I had to have things translated for me and I learned, or, more appropriately, was reminded that Jordan can be trouble. He managed to pretend that something was said was very different that what was actually said. The planning continues for divine retribution (or, at least, another form thereof).

Then it was off to see Stomp with Melissa and Jordan. The drive from 136th and Amsterdam to the Orpheum was an exercise in city driving. I was told I adapted well when I went cruising around and through openings between cars, buses, and people. No scratches or dents. After knowing I was going to see Stomp, I looked up some videos on YouTube. If you have watched them, all I can say is they do not begin to do the performance justice. It was over and hour and a half of unbelievable energy. The drumming or percussion, along with the dancing, tapping, stomping, and other choreography was stunning. There was amazing humor and the person, who played the part of the outcast was hilariously amusing. The main dancer, performer, must have the most well-defined man I have ever seen. Holy Buckets!! And the number of hours they must put into practice and rehearsal is extreme. The entire performance was worth every penny and it was very enjoyable to watch Melissa and Jordan.

Next we took a scenic trek from Manhattan to Queens to find a Cold Stone Creamery for a treat. I also received a gift from the NYPD in terms of a parking ticket. I had the little receipt on the dash board, but it was upside down; I am hoping sending in both with their time stamps remove a 35.00 fine. We will see. At one point early in the day as Mr. Galán and I were walking, Jordan and Melissa were in front of us walking arm-in-arm. I did not have my camera out, but it was have been a good picture. I have noted with before: Nunca he visto a dos hermanos se preocupan por los demás como lo hacen. Ellos ponen irritable con los demás (y Melissa suele ganar), pero se preocupan tan profundamente sobre y para el uno al otro como dos jamás podría. Ellos me inspiran.

Then it was back to pick up Mr. Galán and head back to Pennsylvania. Interestingly, perhaps the only thing cheaper in NYC is gasoline. The other nice thing was I did not have to drive home, so hence this posting. When we got back to their house we had a chance to sit and chat. What an enjoyable and meaningful time. It was a wonderful day with great food, great performances, meeting new people, and being blessed by the presence of three of the most astounding people. They make my life better every day.

Well, break is over, but I took one day to actually “take a break”. It was a memorable day. Muchas Gracias Señor Galán, Jordan, and Melissa; su presencia en mi vida es un regalo. I only hope it’s real.