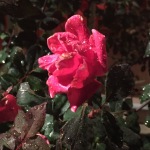 Hello from my snowy little corner.

This past weekend saw the first major snowstorm of the season for Bloomsburg.This was true when I first began this post at the end of January. It is now early April, and in spite of a mild winter I am flying back into the probability of 2-4 inches of snow this evening. Back to the original post.

For me it meant the literal dusting off of the snowblower, and the reality of dealing with a redesign driveway and sidewalk wish necessitated much more snow removal than previous winters. I spent somewhere between three and four hours behind the snowblower, but that did little more than remind me of my time in the upper peninsula where snowblowing was a daily task. So the nearly a foot of snow that fell was nothing more than a nuisance, but not really that much of a nuisance because it was neither cold nor windy. In fact, after the first two hours snowblowing eperience, I came in soaked from sweat rather than soaking through layers because of the snow. Furthermore, in comparison to most of the East coast, and some as little as 60 miles away, the approximate for the snow we got seems to be merely a dusting. It did make the roads a bit slippery, but a little common sense driving while going to the grocery store or out for my colleagues and friends to celebrate their birthday, was no big problem. . . . It is a week later since that snow and the fact I have not gotten any further on this blog is a clear indication of how the last week went. The fact that somehow this blog was never completed demonstrates a pretty clear picture of the semester. The other diffidence is that I have found myself going to bed earlier than I ever imagined possible. I have been in bed by 8:30 some evenings.

Mondays and Wednesdays are busy to begin with, but this past Monday I was once again called to speak with the Scott Township Zoning Board.  The attempt to merely get a variance continues and has continued even longer because an attorney missed the meeting. My neighbors, who are unparalleled by any imagination of a modicum of mutuality, regaled themselves in full force once again, but I appreciated their presence. The local press was there and so, after yet another meeting, they should have quite an interesting story to tell. If even an inkling of this circus would have been apparent back in the spring, I am sure I would have done things very differently. The adage of live and learn is certainly apropos at this point. One of the three are like little kids in a sandbox; if they don’t get their own way they will complain and whine, threatening to take the toys home. The second generally act kind to your face, but are having conversations up and down the block, complaining about the new person in the neighborhood. The third of the group seems reasonable and had been for the most part willing to speak and to listen. For my part, I have been very unreasonable because I widened the driveway to make it easier for the first of the three to back things up and into their yard. For the third, I am sure my irrational behavior is because I signed a right-a-way so they could get a gas line to their house. The second of the neighbors is three doors down the street; so it is profoundly apparent why a one-car, one-person, apartment should be such a tremendous hardship on them. The logic of all of this, in spite of my trying to understand the struggle, escapes me. I am quite sure whatever happens, there will be repercussions. It is the first time in 60 years I have ever struggled with neighbors. Then again, I have never felt so disrespected. The other evening they huddled together and refused to even speak to me. I know they will say I did not speak to them, but I felt a little gained up on: 6-1 is certainly not conducive to handshakes. As you know, if you have been reading, the variance was granted, the next couple pieces are pro forma at best. I will say that there have seemed to be few repercussions at this point in the neighborhood. As I turn back to the original posting, the following sentence has been proven true beyond my wildest imagination. The loss of Bekah at the early age of 38 still seems to be something contrary to reality, but it is painfully true. The loss of other’s who are parents or grandparents seems to be occurring on an alarmingly regular basis.

There are certainly more important things than this continued foolishness. Work is tremendously busy. I already have papers to grade and blogs to read. I am supposed to go to an event tonight, but I have too much on my plate and I need to go into this week on top of things. I could probably pull an all-nighter this evening to be optimally prepared. Tomorrow, again, to the chagrin of the trying-trio, I am having a gathering of students who were on the Poland trip at the house. Car-pooling will be optimal and I will work hard to manage the parking. Today I shopped for various and asundry items and yesterday I ordered food. I think it should be enjoyable. I am going to do some of my own cooking, but the majority I am having brought in. If you are reading now you are probably wondering if you entered a time warp. I have decided to resurrect this post. . . . So if you have been able to follow this sort of Faulkneresque posting, indeed I jumped back and forth from when I originally wrote in late January and early February to the first weekend in April. As I write now, I am descending into Philadelphia and they are warning of turbulence. Indeed, it has begun. It was a bit bumpy, but I survived as you see because I am still writing. By the time I got home tonight I had more excitement as a former colleague decided to stop by. That is a sad and entirely different story for another time.

It is already the middle of the week and I am not finished with my work. I guess that illustrates clearly that l am working diligently, but sometimes not as successfully as I would like, to manage all the pieces. It is always the case at the end of the semester. I need to keep my head down and manage what is coming. It is life and everyone has these times. I think it is time to head out and publish this. Dinner tonight with the Polish students is the next thing on the agenda.

As always, thanks for reading.