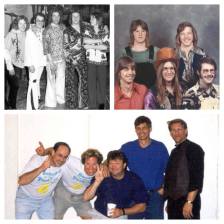 It took me about 45 minutes to write that paragraph, but it was good exercise. For those of you who cannot read or understand Spanish, I spoke about my last day and the opportunity I had to speak with my best friend and his wife (I have noted in other posts on Facebook or elsewhere, perhaps in blogs that he is losing his battle to ALS). I noted that I have lost people to early before their time, often relatives. While some of that was in my 20s and 30s, losing my life-long friend now seems to be a very tough reality check. I realize that we all have a limited time, but this one is so unfair to me in so many ways. I noted that perhaps it is because I’m turning 60 that watching Peter losing his battle to this terrible disease it’s been so hard. Perhaps, in part, it’s because Lydia just passed away and that still causes me to cry at times. Regardless it forces me to face my mortality, which is something that I’ve been doing on a regular basis this past year. That is a somewhat close paraphrase of my Spanish entry.

Perhaps it’s because my latest tests with the doctor were less than ideal. What I know is we have very little sense of what or when our life is completed, or do we? I think there must always be a sense of “but wait, I have more I want to accomplish.” Stephanie wrote to me that I needed to be prepared for a significant difference even speaking on the phone. I know when I go to see him in a couple weeks it will be terrifically difficult. Not because Peter will make it so, but because I will need to literally face the reality that the time my best friend has left on this earth is extremely limited. I’m forced to stare at the harshness of a disease that suffocates the host body. All the ice bucket challenges in the world cannot help him, and while I was asked to do the challenge, I chose to give the money instead. As I got off the phone last night once again I am finding myself in tears. I have spoke at times of justice; where’s the justice in this? Is there even a small measurable way that one can find justice or fairness, when it is likely that Peter will not see his daughter married at the end of the summer? While I struggled to let Lydia go, she was 90. She had lived in amazing life. Is there a reasonable time for one to die? The very question is fraught with absurdity, but I’m forced to admit that even in this case with Peter, at some point as his body leaves him helpless, his death will be compassionate. Mostly for him because of the dreadful consequences of ALS. In a bittersweet way I might even see some measure of compassion or relief for Stephanie, Whitney, and Dane. But search as I hard as I am able, I can find nothing fair or just and the reality that a 58-year-old man is having his very life taken away from him breath by breath, labored movement by movement is brutal beyond words. I think of my former colleague, David Tank, and I still vividly see the picture of him crying as he pushed his wife’s casket down the aisle of the church after she lost her battle with the same horrendous disease. That image in my mind is still one of the most touching things I have ever witnessed. Peter was my best man and I was his. He sang at my ordination. I sang at his daughter’s baptism. Those are some of our intertwining moments. There is an entire tapestry of events that we have shared.

I know the clichés of life and our feeble attempts to make sense of the nonsensical. As I struggled to find the right words and make some sense of my own feelings, it is perhaps now that the words of Sr. Galán provide some comfort. For they are the words that I said to Peter and Stephanie last night. I know there’s not much I can do from 1000 miles away. In fact there’s little more I could do if I were next-door. I could visit more often and I could spend more time, but I’m forced to realize of the giftedness time is. I’m forced to admit that I’ve been able to have a best friend for over 55 years. A friend, who which in spite of any distance or periods of not actually speaking because of space and life, always knew who I was as I knew him. Perhaps one of the most important things I have done was to sit down and actually write him a letter and his birthday two and a half years ago. I remember speaking to him on the phone one night and crying. I praise God for that call and that letter. I told them both last night again how much I love them. José, perhaps you’re right, it’s all we have. I guess that raises another question. If it is all we have why are we so conditional in giving it? Is it because we’re fragile or is it because people don’t know what to do with it? Somehow Dan Fogelberg is in my thoughts again. I will probably embed another video of one of his songs at the end of this post. “The heart is too heavy and fragile to hold and I am afraid I might break it.” Yet, this is whereI find myself struggling to understand what you mean, José. How can my heart be big enough to love all the people? For me to love someone means they have dramatically changed my life. It is not something that happens automatically. Perhaps it should; perhaps I’m just incapable. For me to love someone means not only have they found their way into my heart (and perhaps my house), but I have made myself vulnerable, and not just a little bit (I do not do things a little bit), but in a way that they have enormous power. Ideally, they don’t use it in a malicious way and even when we are hurt, sometimes it is not their intent, but our fragility. As my father used to say, “the people we love the most can hurt us the worst.” As I told you last week I’m still trying to wrap my head around all of this. Perhaps we’ll have a chance to talk again this evening as Melissa has once again surprised me and we will all be together. Perhaps by the time you come, you will have read this and I have no doubt you will have things to say. I always appreciate your thoughts and the passion of your insights. I am always thinking about what you say more than you might ever know. Cuando Melissa a menudo me da miradas de la consternación o hace rodar sus ojos en la exasperación, usted sabe que siempre considero cosas y trato de tener sentido de ellos, pero realmente no pienso que cualquiera de ustedes es que diferente.

Is now after 5:00 a.m. and a couple hours of sleep still seem like a good plan. I would like to be at my office by 8:00 or 8:30 at the latest. I have a lot of my plate for the weekend and perhaps going to dinner and chatting tonight will be a nice distraction from other things that I need to accomplish. This past week was quite productive. The certificate and the minor revision are onto the last level of approval. The concentration is not far behind. If I can get those things done by the end of the academic year and I can hand someone a diploma, I think I will feel like I’ve completed all I need to do. Anything beyond that is an extra gift. Tal vez el punto es este: no hay ningún entendimiento, allí sólo hace. Y es importante hacer todo lo posible podemos.

Off to sleep; thanks for reading.